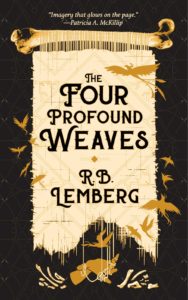 THE FOUR PROFOUND WEAVES
by R. B. Lemberg
September 2020 / Tachyon Publications (US)

THE FOUR PROFOUND WEAVES tells the mystical journey of a pair of elders searching for magic, art, identity and peace. After waiting 40 years to learn the final profound weave, aged Uiziya sets off across the Great Burri Desert to find her exiled aunt, Benesret, the master weaver who creates the cloth of bone for assassins. Accompanying her is Nen-sasair, a nameless man who is looking for Benesret too but for a different reason. Along the way they encounter compelling kindness and merciless violence and are often faced with the choice “to care or not, as all people do.” THE FOUR PROFOUND WEAVES is a philosophical story on family and society and the importance of recognition and transformation.

The Birdverse is the creation of fantasy author R.B. Lemberg. It is a complex, culturally diverse world, with a range of LGBTQIA characters and different family configurations. Shorter works in the Birdverse have been nominated the Nebula, Hugo, Tiptree Award and Rhysling Awards. THE FOUR PROFOUND WEAVES is the first full-length work set in the Birdverse.

R. B. Lemberg is a queer, bigender immigrant from Eastern Europe and Israel. Their stories and poems have appeared in Lightspeed Magazine’s Queers Destroy Science Fiction!, Beneath Ceaseless Skies, Uncanny Magazine, Sisters of the Revolution: A Feminist Speculative Fiction Anthology, among other publications. Check out their web site at: www.rblemberg.net

“A haunting literary fantasy about the fluidity of gender and much else.”―Washington Post

“Uiziya e Lali has waited 40 years for her aunt to teach her the last of the Four Profound Weaves: of wind, sand, song, and bone. But her aunt, Benesret, is a master weaver to assassins, and Surun’ weavers have exiled her. In the city of Iyar, the Khana women are traders, traveling in caravans; the Khana men are scholars, living much of their lives cloistered. A nameless man arrives, trying to find his place in a body that finally fits him after decades living as woman, wife, and mother, looking for Benesret to firm up his place in the world. As he and Uiziya search for Benesret, looking for answers to their individual questions, they must come together to deal with the Collector, the evil Iyar ruler who hoards power and death. VERDICT Nebula-nominated Lemberg’s first novella, set in their deeply queer “Birdverse” universe, presents a beautiful, heartfelt story of change, family, identity, and courage. Centering two older transgender protagonists in the midst of emotional and physical journeys highlights the deep, meaningful prose that Lemberg always brings to their stories.”―Library Journal, STARRED review

“Lemberg’s gorgeous prose sets The Four Profound Weaves apart as one of the most beautifully written fantasies of the year.” ―Locus, Featured on “Recommended Reading List”

“The Four Profound Weaves is a balm and a call to arms. R. B. Lemberg reassures us that there’s still time to find yourself, no matter how old you are; and they stir our revolutionary urges to defeat murderous dictators…[A] finely-drawn, realistic character study of people who love their communities but never quite feel at home in them. And the magical system is a sheer delight. Thoughtful and deeply moving, The Four Profound Weaves is the anti-authoritarian, queer-mystical fairy tale we need right now.” ―Annalee Newitz, author of The Future of Another Timeline

“Lemberg’s outstanding debut novel expands on the short stories of the Birdverse that they have been publishing for about a decade, most frequently in the lit mag Beneath Ceaseless Skies, drawing readers into a lush desert world and the two elders from different cultures navigating its wilds. Uiziya, a weaver of the desert snake-Surun’ people, has waited 40 years for her exiled aunt Benesret to return and teach her the Four Profound Weaves, which would enable her to create a carpet of wind, carpet of sand, a carpet of song, and a carpet of bones. Nen-sasaïr, a trans man from the more urban land of Iyar, only recently revealed his true gender and is now alienated from home and family. He comes to the desert hoping to re-ground himself by asking Benesret for a new name. When the two get tired of waiting, they set out together on a quest to find Benesret themselves and, through her, realize their dreams. Uiziya and nen-sasaïr’s journey is enthralling and frequently moving, as along the way they are repeatedly faced with the choice “to care or not, as all people do.” Lemberg writes deeply considered, evocative portraits of their characters, handling sexuality and gender especially well. This diverse, folkloric fantasy world is a delight to visit. ”  ― Publishers Weekly, STARRED review

“R.B. Lemberg spins a world of singing gods, desert nomads, and magic humming in the wind in The Four Profound Weaves, the first novella set in their Birdverse universe…Impressive world building renders the shifting hues of the desert sands and the cold stone of The Collector’s palace in tight prose. Social structures and customs are relayed with the same deft hand; the free, accepting atmosphere of the desert and its people ends at Iyar’s stifling walls. In The Four Profound Weaves, the nameless man and Uiziya are compelling, complementary leads—both stubborn, loyal, and struggling to decide where their loyalties lie. Though external battles raise stakes—a palace torturer wields a weapon filled with trapped and tormented spirits, for example—it is the twin leads’ internal progress that arrests the most. They search for identity and hope amid the rubble of youthful expectations and regret.” ― Foreword Reviews, STARRED review

“What a treat: the full-length debut set in R.B. Lemberg’s super-queer Birdverse universe!
It’s a wonder of identity, evolution and bravery in a time when we need it most.” ― Ms. Magazine, Featured as one of the “Reads for the Rest of Us”