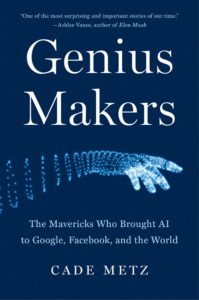 GENIUS MAKERS: The Mavericks who Brought A.I. to Google, Facebook, and the World
by Cade Metz
March 2021 / Dutton (US)

New York Times Silicon Valley beat reporter Cade Metz has an insider’s perspective on the greatest tech story of our time — a story that no one else has been in a position to tell.

Long dismissed as unattainable, artificial intelligence was, for decades, ignored by the big tech giants and universities. The small community of AI researchers worked on the fringes of the scientific community. Then, in 2008, two chance meetings changed everything. The first was between a university researcher and a Microsoft programmer. The second was at Google, where another academic convinced a Google exec to pay closer attention. Within months both Microsoft and Google achieved breakthroughs that vastly improved their speech recognition and image recognition capabilities, respectively. And they both realized the same thing: AI–real artificial intelligence–was far closer than they realized. The first company to achieve full AI would dominate the next several decades of tech. The race was on.

Google immediately launched an in-house artificial intelligence lab. They also went after the few AI researchers, both in academia and those running startups. Microsoft did the same but stumbled due to messy internal bureaucracies. Facebook took notice and quickly poached Microsoft’s team. Then Elon Musk jumped in and founded OpenAI, stealing talent from both Google and Facebook. These companies began waging an unprecedented arms race–which now includes China and Russia.

The new AI tech breakthroughs not only drew the interest of companies but of governments, too. Metz’s epic story dramatically presents the fierce competition among national interests, shareholder value, the pursuit of scientific knowledge, and the very human concerns about privacy, security, bias, and prejudice. This technology is already guiding our leisure time, our retail choices, our cars, our factories, our markets, and our military weapons. How far will we let it go?

Like a great Victorian novel, this world of eccentric, brilliant, often unimaginably yet suddenly wealthy characters draws you into the most profound moral questions we can ask. What does it mean to be smart? To be human? What do we really want from life and the intelligence we have or might create?

Cade Metz is a technology correspondent with The New York Times, covering artificial intelligence, driverless cars, robotics, virtual reality, and other emerging areas. Previously, he was a senior staff writer with Wired magazine. GENIUS MAKERS is his first book.

« Carving a narrative out of a complex and ever-changing cast of characters… the book is filled with enlightening anecdotes that add texture and drama to the story. GENIUS MAKERS opens with Geoffrey Hinton, the Brit turned Canadian who is widely recognized as having played the most critical role in developing deep learning, the branch of AI that is changing the world today.” —Washington Post

« Valuably suggests a framework for the right questions to ask now about A.I. and its use. GENIUS MAKERS is about the people who have built the A.I. world…” —New York Times Book Review

« With well-crafted storytelling and extensive research, Metz captures the thrill and promise of technological innovation.” —Booklist

« This colorful page-turner puts artificial intelligence into a human perspective. Through the lives of Geoff Hinton and other major players, Metz explains this transformative technology and makes the quest thrilling.” – Walter Isaacson, New York Times bestselling author of Steve Jobs