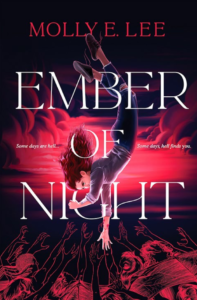 “Bloodlines” series
by Molly E. Lee
1st in a 4-book series to be published from May 2021 onwards – Entangled Publishing (US)

Perfect for fans of Hush Hush, this epic angels-and-demons series combines all the best tropes of the genre: pulse-pounding romance, epic worldbuilding, and plenty of twists and turns.

Harley Locke is no stranger to darkness, but when the irresistibly hot and broody new guy crashes into her world, she isn’t sure she’ll survive him. She has one year before she can take her kid-sister and escape their volatile home life, and she’ll do anything to protect her—including accepting her supernatural heritage that has every demon in Chicago chomping after her rare blood.

Draven Reid has spent the better part of a century searching for the Key to opening the Gates of Hell so he can rescue his wrongfully imprisoned twin brother, and he’s prepared to shed blood to do it. But soon the person he’s prepared his whole life to kill turns out to be the one person who makes him feel alive.

Dodging an abusive father, demons prepared to drain her dry, and a newly formed love that may be the death of her, Harley will have to decide on her own what’s worth saving: the world that has done nothing but chew her up and spit her out, or the boy whose stolen her heart, but has a blade with her name on it.

Molly E. Lee writes New Adult and Young Adult contemporary featuring strong female heroines who are unafraid to challenge their male counterparts, yet still vulnerable enough to have love sneak up on them. In addition to being a military spouse and mother of two + one stubborn English Bulldog, Molly loves watching storms from her back porch at her Midwest home, and digging for treasures in antique stores.