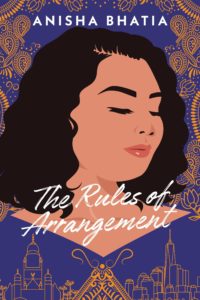 Zoya Sahni has a great education, a fulfilling job and a loving family (for the most part). But she is not the perfect Indian girl. She’s overweight, spunky and dark-skinned in a world that prizes the slim, obedient and fair. At 26 she is hurtling toward her expiration date in Mumbai’s arranged marriage super-mart, but when her aunties’ matchmaking radars hones in on the Holy Grail of suitors–just as Zoya gets a dream job offer in New York City–the girl who once accepted her path as almost option-less must now make a choice of a lifetime.

Big-hearted with piercing social commentary, THE RULES OF ARRANGEMENT tells a powerful, irresistibly charming and oh-so-relatable tale of a progressive life that won’t be hemmed in by outdated rules. But not without a few cultural casualties, and of course, an accidental love story along the way.

Anisha Bhatia moved to San Diego from Mumbai fifteen years ago armed with marriage proposals and good intentions. She studied writing at the New York based Writer’s Studio which includes Pulitzer Prize winners like Jennifer Egan as their alumni and Philip Schultz as teachers. She is an active member of San Diego Writers Ink and a rotating beat writer for the Women’s Fiction Writers Association. THE RULES OF ARRANGEMENT is her first novel.