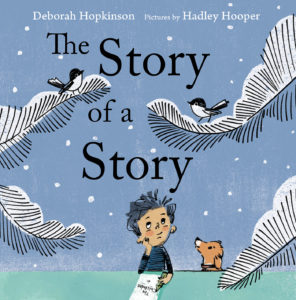 THE STORY OF A STORY
by Deborah Hopkinson, illustrated by Hadley Hooper
November 2021 – Neal Porter Books / Holiday House (US)

Writers young and old know it’s hard to create a story of one’s own, here’s a simple, elegant picture book that might help them find the key. Hint: It involves persistence.

THE STORY OF A STORY follows a boy who struggles to find inspiration and get his words flowing. He tries everything, scribbling, scrawling, and crumbling pages. He reads stories he loves and eats a cookie reaaaaaally slowly, just to pass the time. But just when he’s about to give up hope, he sees a little chickadee collecting seeds outside his window. He admires its concentration and commitment as it picks away, one seed at a time, determined and unstoppable. The boy knows this is what it takes to create something special, so he comes back to his desk and writes just one word, and then another.

Deborah Hopkinson is an award-winning author of picture books, fiction, and nonfiction for young readers. In 2013 she received a Robert F. Sibert Honor and YALSA Excellence in Nonfiction Award honor for Titanic: Voices from the Disaster. She has won the SCBWI Golden Kite Award for Picture Book Text twice, for A Band of Angels and Apples to Oregon. Sky Boys, How They Built the Empire State Building, was a Boston Globe/Horn Book Honor awardee.

Hadley Hooper is a fine artist and the illustrator of many distinctive picture books, including The Iridescence of Birds, by Patricia Maclachlan, Another Way to Climb a Tree, by Liz Garton Scanlon, and Two Brothers, Four Hands, by Jan Greenberg and Sandra Jordan.