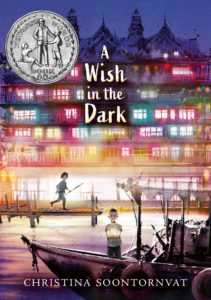 A WISH IN THE DARK
by Christina Soontornvat
March 2020 – Candlewick Press / Walker Books Group (US)
A 2021 Newbery Honor Book.

A boy on the run. A girl determined to find him. A compelling fantasy that looks at issues of privilege, protest, and justice.

All light in Chattana is created by one man — the Governor, who appeared after the Great Fire to bring peace and order to the city. For Pong, who was born in Namwon Prison, the magical lights represent freedom, and he dreams of the day he will be able to walk among them. But when Pong escapes from prison, he realizes that the world outside is no fairer than the one behind bars. The wealthy dine and dance under bright orb light, while the poor toil away in darkness. Worst of all, Pong’s prison tattoo marks him as a fugitive who can never be truly free. Nok, the prison warden’s perfect daughter, is bent on tracking Pong down and restoring her family’s good name. But as Nok hunts Pong through the alleys and canals of Chattana, she uncovers secrets that make her question the truths she has always held dear.

Set in a Thai-inspired fantasy world, Christina Soontornvat’s twist on Victor Hugo’s Les Misérables is a dazzling, fast-paced adventure that explores the difference between law and justice — and asks whether one child can shine a light in the dark.

Christina Soontornvat grew up in a small Texas town, where she spent many childhood days behind the counter of her parents’ ­Thai restaurant with her nose in a book. Christina has a BS in mechanical engineering and a master’s degree in science education and spent a decade working in the science museum field. She now lives in Austin, Texas, with her husband and two children. https://soontornvat.com/about/

“It’s a novel—a stand-alone, no less—that seems to have it all: a sympathetic hero, a colorful setting, humor, heart, philosophy, and an epic conflict that relates the complexity and humanity of social justice without heavy-handed storytelling. Soontornvat deftly blends it all together, salting the tale with a dash of magic that enhances the underlying emotions in this masterfully paced adventure. An important book that not only shines a light but also shows young readers how to shine their own. Luminous.” —Booklist (starred review)

“Nuanced questions of morality, oppression, and being defined by one’s circumstances are compounded with exciting action in this novel inspired by Victor Hugo’s Les Misérables. The characters are resonant, and the action is enhanced by the fantastical Thailand-like setting. The original storyline and well-developed characters make this a standout novel. Highly recommended.” —School Library Journal

“Set in a fantasy analogue of Thailand, all characters are presumed Thai, and Thai life and culture permeate the story in everything from the mangoes Pong eats in prison to the monks he meets beyond the prison’s walls. It’s also a retelling of Victor Hugo’s Les Misérables, and Soontornvat has maintained the themes of the original while making the plot and the characters utterly her own. Pong’s and Nok’s narratives are drawn together by common threads of family, loyalty, and a quest to define right and wrong, twining to create a single, satisfying tale. A complex, hopeful, fresh retelling.” —Kirkus Reviews

“Soontornvat artfully builds up to a triumphant confrontation, weaving in important themes about oppression and civil disobedience along the way.” —Publishers Weekly

“Combining themes of coming-of-age, protest, and the power of freedom, this book will inspire young readers to stand up for their own beliefs as well as those of all people. This is a thought-provoking adventure that will cause readers to ask themselves whether being safe or having freedom is the better option, and if that needs to be a choice at all.” —School Library Connection