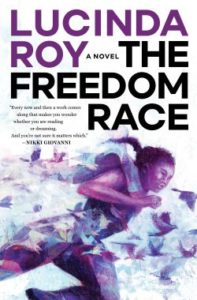 Echoing The Underground Railroad and The Handmaid’s Tale, Lucinda Roy’s THE FREEDOM RACE is set in an alternate future where a bloody second civil war has torn the United States apart and slavery has returned.

Ji-ji Lottermule, a seedling on Planting 437, is determined to break free and realize her uncle’s prediction that she is born to fly like her ancestors, who were stolen from their homelands in a re-established slave trade out of Africa. Along with Tiro, the boy she loves, they train for the annual races that promise liberty in the neighboring SuperStates—where people of all races live free—but the journey is fraught with challenges as so many are determined for them to fail.

In a future filled with echoes from a haunting past, THE FREEDOM RACE shows the importance of daring to act, even in the face of your own despair and believing in the magical when reality has failed you.

Lucinda Roy is the author of the novels LADY MOSES (HarperCollins 1998) and THOTEL ALLELUIA (HarperCollins 2000); the poetry collections FABRIC (Willow Books 2017), THE HUMMING BIRDS (Eighth Mountain Press 1995), and WAILING THE DEAD TO SLEEP (1988); and the nonfiction title NO RIGHT TO REMAIN SILENT: What We’ve Learned from the Tragedy at Virginia Tech (Crown 2009), for which Roy was awarded the Press Women’s Association of Virginia 2009 Newsmaker of the Year in recognition. Roy serves as Alumni Distinguished Professor in Creative Writing at Virginia Tech, where she teaches poetry, fiction, and creative nonfiction. Her work has appeared in numerous publications.