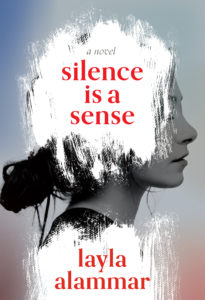 A transfixing and beautifully rendered novel about a refugee’s escape from civil war—and the healing power of community.

A young woman sits in her apartment, watching the small daily dramas of her neighbors across the way. She is an outsider, a mute voyeur, safe behind her windows, and she sees it all—the sex, the fights, the happy and unhappy families. Journeying from her war-torn Syrian homeland to this unnamed British city has traumatized her into silence, and her only connection to the world is the column she writes for a magazine under the pseudonym “the Voiceless,” where she tries to explain the refugee experience without sensationalizing it—or revealing anything about herself.

Gradually, though, the boundaries of her world expand. She ventures to the corner store, to a bookstore and a laundromat, and to a gathering at a nearby mosque. And it isn’t long before she finds herself involved in her neighbors’ lives. When an anti-Muslim hate crime rattles the neighborhood, she has to make a choice: Will she remain a voiceless observer, or become an active participant in a community that, despite her best efforts, is quickly becoming her own?

Layla AlAmmar is a writer and academic from Kuwait. She has a master’s degree in creative writing from the University of Edinburgh. Her short stories have appeared in the Evening Standard, Quail Bell Magazine, the Red Letters St. Andrews Prose Journal, and Aesthetica Magazine, where her story “The Lagoon” was a finalist for the 2014 Creative Writing Award. She was the 2018 British Council international writer in residence at the Small Wonder Short Story Festival. Her debut novel, THE PACT WE MADE, was published in 2019. She has written for The Guardian and ArabLit Quarterly. She is currently pursuing a PhD on the intersection of Arab women’s fiction and literary trauma theory.

“SILENCE IS A SENSE opens the door on lives we need to hear more about. Lyrical, moving, revealing, it made me understand better the very human need for safety and contact.” —Tracy Chevalier

“SILENCE IS A SENSE is a fierce novel. The prose is ferocious, the pace is ferocious and the beguiling central character, known as The Voiceless, conceals behind her inability – or reluctance – to speak, a striking, visceral intensity. She obsessively watches the people around her to silence her own trauma, but every now and then it can’t help but break through. Layla AlAmmar has skillfully woven a narrative of memory and grief with an illuminating social critique of the position of asylum seekers within contemporary British society. It is daring and devastating.” — Fiona Mozley, Booker Prize finalist and author of Elmet and Hot Stew

“In experimenting so freely with tone and form — at one point, the narrator writes her own short story — AlAmmar models how to relinquish tight narrative control for the sake of following language to its own, organic ends. This is not just good storytelling, but a blueprint for survival: Turn to language even when there appears to be no hope. Recalling the civil war in Syria, the narrator writes: “For us, a protest isn’t a measured expression of discontent. It’s a reckless flinging of ourselves headlong into a future whose dimensions we just can’t get to stick.” — The New York Times Book Review

“AlAmmar takes a fascinating approach to the refugee crisis in this, her second novel. Initially, her mute, traumatised protagonist simply observes life in the unnamed English city that is her new home. As she tentatively begins to interact with those she has spied upon, revealing more about her own identity and history, the safety she seeks looks increasingly unlikely. Compelling and original, Silence Is a Sense is uncomfortably close to the bone, depicting a country riven by racism and violence.” — The Guardian (UK)

“[T]he conflicts over immigration and racism are brilliantly distilled, and they dovetail seamlessly with the narrator’s lyrical, increasingly defiant narration. Patient readers will find much to ponder.” —Publishers Weekly

“With gut-punching clarity, AlAmmar unpacks the complicated identity of a refugee discovering that safety is not what it seems, as she learns to find her voice in a new home.” —Booklist

“Kuwaiti-American author Layla AlAmmar masterfully depicts that silence is a refuge, too, for people affected by the unspeakable . . . AlAmmar succeeds in challenging the refugee or asylum-seeker stereotype, including the one of a young Arab woman.” —The Markaz Review