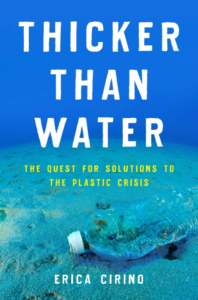 THICKER THAN WATER
by Erica Cirino
Fall 2021 / Island Press (US)

Appealing to readers of Carl Safina and Elizabeth Kolbert, Erica Cirino’s Thicker Than Water is a riveting nonfiction debut that takes you to the front lines of Earth’s plastic pollution crisis!

Plastic is everywhere—it’s in our food containers, keyboards, glasses, even our toothbrushes. It’s lightweight, versatile, and so cheap that we often forget how much it permeates our lives. But our relationship with plastic is not a healthy one, and our worldwide reliance on it is affecting our planet. The oceans swirl with plastic detritus; scientists have discovered dead whales with stomachs filled with plastic bags, seabirds eating plastic lights, and turtles suffocating on plastic straws stuck in their nostrils. Less obvious, but potentially just as deadly, are the plastics that break down in the ocean into small particles over time, called microplastics. These tiny pieces contain toxic chemicals that are released into the bodies of wild animals and travel up the food chain into fish and other creatures, eventually making their way onto our plates and into our stomachs.

Thicker Than Water charters a course through some of the key sites in the fight against plastic pollution—from the ocean currents dotted with trillions of tiny plastic pieces to research centers across the globe working on plastic alternatives. Readers will be exposed to the shocking extent of plastic contamination in our environment and ecosystems, but will also be introduced to the scientists, advocates, innovators, and ordinary citizens who are trying to solve the problem.

A ground-breaking work of journalism and essential reading for those eager to understand the enormous impact plastic has on our planet, Cirino illuminates our path to a better future.